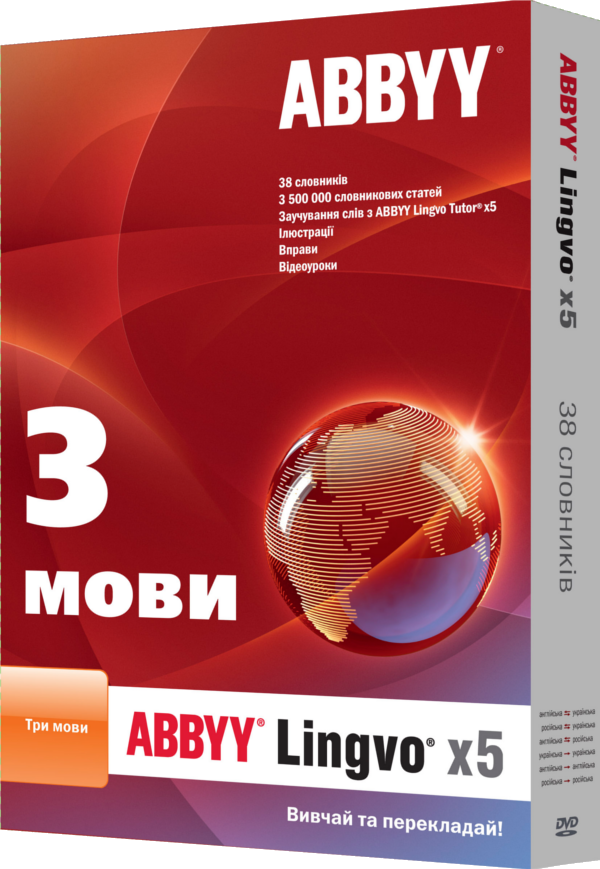 Uploaded: 11.06.2018
Content: text 29 symbols
Loyalty discount! If the total amount of your purchases from the seller Miter more than:
If you want to know your discount rate, please provide your email:

Miter information about the seller and his items
onlineAsk a question

Main Features
38 general, explanatory, educational and grammar dictionaries
2 150 000 entries
A large English-Russian training dictionary combinability Kaul MR, Khidekelya SS, 2010
Updated dictionaries Oxford® Dictionary of English, 3rd Edition and New Oxford® American Dictionary, 3rd Edition
15 000 British English, 15 000 American English, 10 000 Ukrainian and 20 000 Russian words, voiced by native speakers of these languages
Translate by homing in any application
New translation functions for guidance. Appeared in one of the previous versions of the dictionary the ability to quickly translate text by hovering the cursor on it, ABBYY Lingvo x5 is improved due to the integration of text recognition technology. Now users will be able to translate words in PDF files, Flash movies and even subtitles in movies.

User dictionaries for work and study
In addition to the existing dictionaries, ABBYY Lingvo x5 allows you to create your own dictionaries for study and work. Educational, in order to consolidate the material passed and expand the vocabulary, and professional - to preserve the unity of terminology in the translation of corporate materials and specialized documentation.

When creating your own dictionaries, you can add illustrations to the dictionary card. This will help to achieve a better translation of highly specialized and polysemantic terms in thematic texts and will give interactivity to the learning process, making it more exciting. Users of previous versions of the product will be able to transfer previously created dictionaries to the new version of the program.

Studying of foreign language
Approach the training correctly - learn foreign languages ​​with the universal dictionary ABBYY Lingvo x5. It has everything for a full-fledged perception of the language.

Learn the words together with the new exercises in the ABBYY Lingvo Tutor program
Remember the correct pronunciation of words and phrases, voiced by a native speaker
Learn actual examples of using words on the Internet and apply it in oral communication
Study the conjugation tables for each verb
Improve communication skills with examples of letters from Oxford® University Press
Expand the vocabulary with 1 LLC illustrations in the dictionary New Oxford® American Dictionary
Watch educational videos from English Club TV®
Access to the sample word usage database
If you have an Internet connection, ABBYY Lingvo x5 also provides for the first time access to an extensive online translation memory database (TM) for English, German and French. The program shows examples of the modern use of words and phrases in sentences from fiction and technical literature, legislative and legal documents, from Internet sites.

With the help of this database, the user can quickly select the exact translation of the word, determine whether the speech is actually used in speech, find new variants of translation and examples of their use. The database of translation memory already contains more than 1 million sentences and is constantly growing.

This product has no packaging and delivered via electronic communication channels.

The product has no territorial restrictions.